Brought before Duke Theseus, she is commanded to marry Demetrius. If she will not, she must face death or the nunnery. Resolved to love Lysander, Hermia plots with him to run away from Athens. They share their plans with Hermia's best friend Helena, who is hopelessly in love with Demetrius. Helena decides to tell Demetrius of Hermia's flight and as he follows Hermia, she follows him. Meanwhile, carpenter Quince and his fellow workingmen begin casting a play to enter in the Wedding Day Competition. It will be a dramatization of the classical story, Pyramus and Thisby. They decide to rehearse in the forest, the same forest into which our young lovers have escaped. In that forest, Oberon is King of the Fairies and Titania is Queen. Under the watery moonlight they fight for custody of a young orphan, born in India to a mortal attendant of Titania's. Their brawling disturbs the universe, but Titania will not give the boy up. Oberon vows revenge. He orders his henchman Puck to find a magic flower that can cause a sleeping person to "madly dote upon the next live creature that it sees." The night proceeds, guided and misguided by love and magic. 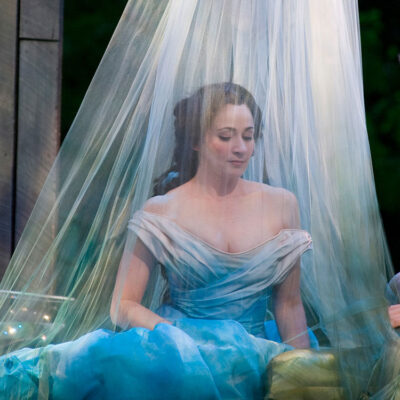