The Comedy of Errors is more than the sum of its pratfalls. It is a search for identity. It is loss, and it is love, and it is trust. It is the forbidden. And just as you may howl, also may you cry.

We approach The Comedy of Errors for what is Shakespearean about it, That is to say, we explore the humanity of it, the part that is neither evil nor heroic. We approach it by asking what the audience will see of itself on stage. The answer as we see it? Much.

You might think we creatures have changed a lot in the 400 years since Shakespeare wrote this play. You might also think we haven't changed a bit.

The Comedy of Errors – Director's notes

So these two average Joes find themselves trapped in an exotic, foreign locale. Beautiful women throw themselves at them. Angry citizens chase them through the streets. Their wits are their only defense. And they talk to the audience. Sound like a Bob Hope and Bing Crosby Road picture? You'd be off by about 400 years.

Long before those funny guys took the Road to Morocco/Bali/Zanzibar/Utopia, William Shakespeare was writing the prototype. With not one but two sets of twins, he mines all the comic possibilities that mistaken identity in a strange land can present. And in the process he begins to explore many of the themes he will explore in depth later in his career – missing children, fathers and sons, jealous spouses, misplaced jewelry, separated twins, love at first sight, identity theft. (For a fun intermission game, try matching that list to as many Shakespearean plays as you can.) This very funny play begins with a tale of loss told by a man condemned to death. How can this be a comedy?

I think the great comic exuberance that drives this play springs from the extreme stubbornness with which all the characters cling to their own versions of the truth. My husband's not here, so my marriage must be on the rocks. You think I'm your husband, so you must be a witch. My wife has locked me out at lunchtime, so I'll have lunch with the beautiful courtesan down the street. And why should I pay for a necklace that I've never even seen? This is the stuff of farce. But in the context of this beautifully structured play it is, of course, the stuff of humanity. 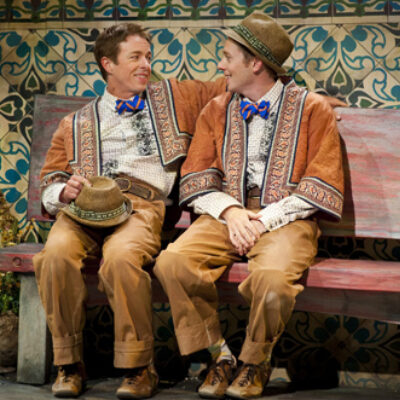