When Anna arrives it's apparent that she has a crush on Kate and is trying to win her over. Anna tells a story of when she found Kate sitting in silence while a man sat crying in an arm chair. They went to bed, but the man continued to cry. He then walked over to Anna's bed and stared before going over to Kate's bed, laying down, and then leaving. Kate says nothing, but decides to take a bath. While gone, Deeley confronts Anna, telling her that he's met her before. Anna pretends to have no idea what he's talking about. Kate returns and the two continue to compete for her attention. Kate says nothing, but when prompted to deny or confirm their stories, she says to Anna, "I remember you dead." Kate then goes on to say Anna had been dead in bed, covered in dirt, and how her body was gone when a man came. He laid in the bed, thinking Kate would sleep with him. Instead, she nearly suffocated him with mud from the flower pot, and his response was a marriage proposal. 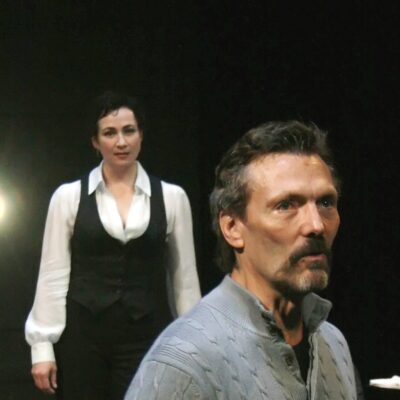