Quick Chat is a blog series where we get the scoop on APT cast and staff. This week, Land Manager Reed Cockrell talks land grants, box turtles and why we should cherish nature wherever we go.

APT: How long you’ve been working with APT, and what path brought you here?
Reed Cockrell: I’ve had the Land Manager position since last January. Prior to that, I worked on the Facilities Crew for three summers (2010 to 2012). I grew up in southern Wisconsin, and have been attending plays at APT since 1985. I have a Bachelor’s degree in Reclamation and Conservation from UW-Platteville, and a Master’s degree in Range Ecology from North Dakota State University. I’ve worked in the field of Ecological Restoration for over twenty-five years, with private companies and the Wisconsin Department of Natural Resources, as well as The Nature Conservancy and other non-profit organizations. I have extensive experience in most aspects of native ecosystem restoration: brush clearing; invasive species control; seed collecting and planting; prescribed burning; and species monitoring. I am also a Park Naturalist for the DNR at Blue Mound State Park, and a volunteer naturalist for a local private Nature Preserve.

I’ve had a keen awareness of the natural beauty at APT since I first started attending the plays. In 2009, I noticed the infestation of invasive leafy spurge in the Hill Prairie and volunteered my services to help eradicate it. This led to my initial stint on the Facilities Crew, where I had the opportunity to put in the prairie plantings around the Box Office. When the Land Manager position was created, I made inquiries… and here I am!

APT: What does a land manager do?
RC: Many of my duties overlap with those in Facilities, especially during the Play Season: mowing grass around the buildings, in the picnic grounds and parking lot; clearing fallen trees and branches; keeping the paths around the theaters neat and clean. But most of my duties center on management of the various plantings (around the theaters, the picnic grounds, Box Office and parking lot), as well as the “wild areas” (prairies, woods and savannas) that make up most of the APT Campus.

I installed and maintained several plantings this year: the woodland plants in the flower box behind Section 2 at the Hill Theatre; the prairie plants at the entrance sign in the parking lot; and a number of trees and shrubs around “John’s Place” and the slope behind the Hill Theatre Stage. Once these sites were planted, weeding and watering was essential for the first growing season, so that was a regular part of my routine.

Management includes prescribed burns (usually in the early spring) and control of invasive species, through hand pulling, cutting, and judicious use of herbicide. Some of the worst invasives at APT include garlic mustard, sweet clover, leafy spurge, bush honeysuckle, Japanese barberry, autumn olive and black locust. I led volunteer work parties in the spring to pull garlic mustard, and guided an intern this summer in pulling sweet clover. Most of the other species require a trained chainsaw operator and/or herbicide applicator, so I do most of that work myself.


APT: What’s your favorite part of the job?
RC: My favorite kind of work has always been outdoors, working with my hands while also using my brain. I subscribe to Aldo Leopold’s definition of a conservationist, written not with a pen but with an axe: “It is a matter of what one thinks about while chopping, or while deciding what to chop. A conservationist is one who is humbly aware that with each stroke he is writing his signature on the face of his land.” The work is well-suited for me, and I gain particular satisfaction in using my skills and knowledge to benefit a very special place that I have loved for so long.

APT: We’re excited about the Landowner Incentive Program funding APT received from the WDNR, and looking forward to putting it to good use. Can you talk a little bit about what we’re hoping this grant will fund on the APT Campus?
RC: When APT was founded, there was a very small piece of remnant prairie at the top of the current Wild Side Trail. It was surrounded by eastern red cedars, a native species which only existed on isolated rocky outcrops prior to European settlement. With the suppression of natural wild fires, red cedar expanded its range, taking over many of the surrounding prairies.

In 2012, APT received its first Landowner Incentive Program (LIP) Grant, to remove some of the surrounding red cedars and to restore the site to prairie. This project was wildly successful, with the prairie area expanding to more than two acres. This year, we received an additional LIP Grant, which is being used to continue the prairie expansion. Red cedars are being removed, in addition to black locust and other trees that do not belong on a prairie (oaks and some hickory will be left in place). We are also removing invasive brush. This area will be seeded with prairie species, and prescribed fire will be re-introduced to the landscape. The prairie will be expanded to five acres in total.
In addition to acres of beautiful prairie grasses and flowers, this project will provide habitat for animals such as the federally endangered rusty patched bumble bee and the state endangered ornate box turtle (both of which are present at APT). 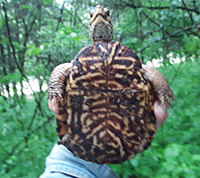 APT: What’s the most exciting part of the project for you?
RC: I LOVE the fact that we have ornate box turtles at APT! As I said earlier, they are a state endangered species in Wisconsin, living mainly in the sandy habitats of the Lower Wisconsin River bottoms. I worked with ornates and their habitat during my stints with TNC and the DNR, and was thrilled to learn (from a trivia question in “The APT Squares” in 2009!) that they were present here! I knew that a turtle had once been found on the remnant prairie years ago, and last June I found one myself on the lower stretch of the Wild Side Trail! The turtle I found was a female (the previous two sightings had been males), so I like to think we have a breeding population at APT. The LIP Grant project will greatly expand the potential habitat for them, which really excites me!

APT: Why is the care and keeping of APT’s property important?
RC: At APT, Nature and the Arts come together in a way that is surely unique. As amazing as the theatrical performances are, it is the outdoor setting, the picnics, the whip-poor-will music, the Walks Up (and Down) the Hill, and the side trips through our prairies and savannas that make this place truly magical… I am honored to be a part of it!